Each annual Murdoch Awards event is special to the organisers, prizewinners and sponsors alike, but this year the occasion was marked with huge sadness over the passing of Richard Murdoch in January 2018.

It is safe to say that without Richard Murdoch there would be no Lead Contractors Association, or even if it did exist, it would certainly not be in its present form. The Murdoch Awards were established in 1996 by the LCA to mark Richard’s retirement from the industry.

He quickly became recognised as the foremost technical authority on the design and specification of lead sheet for roofing and cladding, in no small part due to the publication of his research which resulted in the first single technical reference for leadwork – Lead Sheet in Building – in 1978.

Richard also played a huge part in solving a growing number of problems with the installation side of the industry. Working closely with roofing contractors who started to specialise in lead sheet, he recognised their potential and the value of having their own independent organisation. As a result, in 1984 the LCA was formed.

General manager of the LCA, Nigel Johnston, played host to the awards evening and was delighted to welcome Richard’s wife, June, who presented the awards, as well as his daughter Linda.

Before the presentations took place, Alan Barker, national sales manager of awards sponsor Associated Lead Mills (ALM), gave a brief introduction to the awards. ALM has sponsored the Murdoch Awards since 2005 and created the Murdoch Sponsors Awards the following year.

He then handed over to specialist lead consultant Ian Harvey, who gave spoke about this year’s entries on behalf of the judges. Then it was down to LCA chairman Mike Hempstock to announce the awards themselves, which June Murdoch came forward to present to the winners.

As is customary, the Sponsors Awards were announced first. In third place was Full Metal Jacket Ltd, for their project at St Joseph’s School, Willesden. The work involved refurbishment of the school’s cupola tower base and dome.

Runners-up were Eastern Foundry Lead Ltd, for their work at Pond House, Syleham. Contracts manager Luke Waller explained: “Our customer was having a glazed link installed to connect his outbuilding to his main residence and wanted a lead roof installed.

“It was a great project to work on for a fantastic customer who was over the moon with how the roof turned out. We always take great pride in the work we do and are pleased to add the runners-up award for this project to our other accolades, which include a Royal Warrant in leadwork.”

However, it was Celtic Leadwork who took first prize for their project at Hillesden Avenue in Barnes. Technical specifications included a main fully vented flat roof laid in code 6 milled lead due to the lead bay sizes. A lower flat roof was laid in code 8, also due to the bay sizes.

The mansard area, as was the lead cornice capping, was laid in code 5 milled lead supplied by Associated Lead Mills, through Chandlers Roofing Supplies. On to the Murdoch Awards themselves, and this year Richardson Roofing Ltd took third place with their work at the headquarters of Hampshire County Council Architecture, Design and Property Services in Winchester.

Commercial manager Andy North said: “The project included a total re-stripping and removal of existing roof and a complete replacement of roof covering and substrate due to a number of leaks attributed to design and installation failures.

“Eighty-five tonnes of code 6 lead sheet from Envirolead, covering an area of 1300m2, was installed to our own design. The project involved replacement of lead on mansards, perimeter details, and gutters. On completion it was fully vetted by Ian Harvey, which enabled the project to qualify for the 25-year LCA insurance-backed and underwritten guarantee.”

Full Metal Jacket Ltd again featured in the awards, this time as runners-up for their work in the west end nave of Canterbury Cathedral. They replaced the traditional cast lead roof and the original standing seam joints to their original design.

However, there was no doubt in the judges’ minds as to the overall winner – CEL, for their work on the Queen’s Diamond Jubilee Tower at Westminster Abbey. The first new build to the abbey in a lifetime and situated just outside Poet’s Corner, it displays stunning herringbone lead cladding to its pillars and roof.

CEL general manager Jonny Growcott said: “Our involvement from design guidance and interpretation, through to completion over a 12-month period, was a journey that drew the best from everyone involved”. “Leadworkers, project managers and the entire team of CEL at some time had their own input, which makes for such a gratifying feeling”.

“We were supported by our preferred suppliers of lead, British Lead Mills, who must be thanked for making sure that every piece of the 50 tonnes of lead applied to the seven-storey polygonal structure – designed by Ptolemy Dean – was checked and double-checked.

This meant that our leadworkers could then work confidently in producing our very best for Her Majesty.” The 2018 winners have once again demonstrated the excellence achieved in lead sheet roofing by LCA members, and attention is already turning to the 2019 awards. 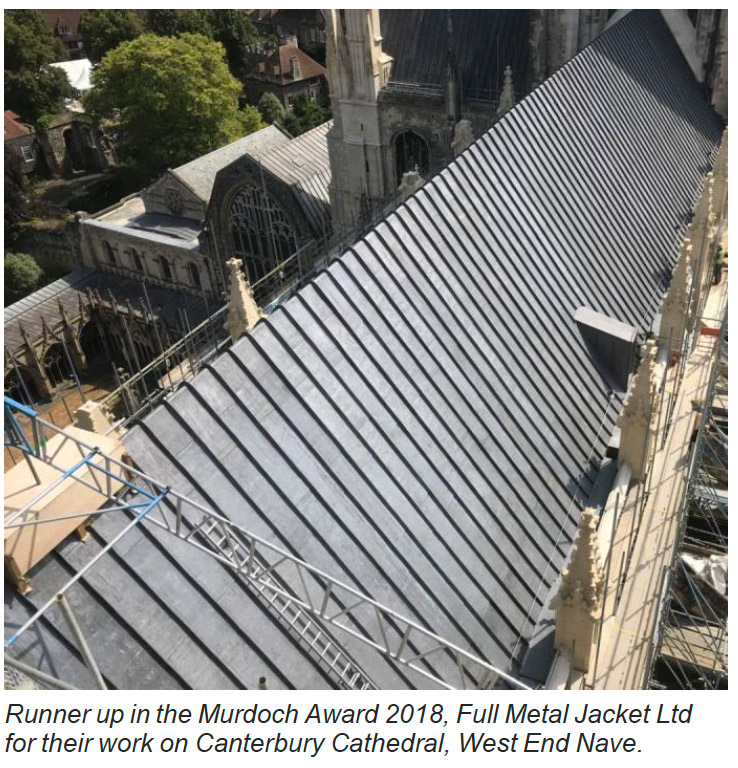 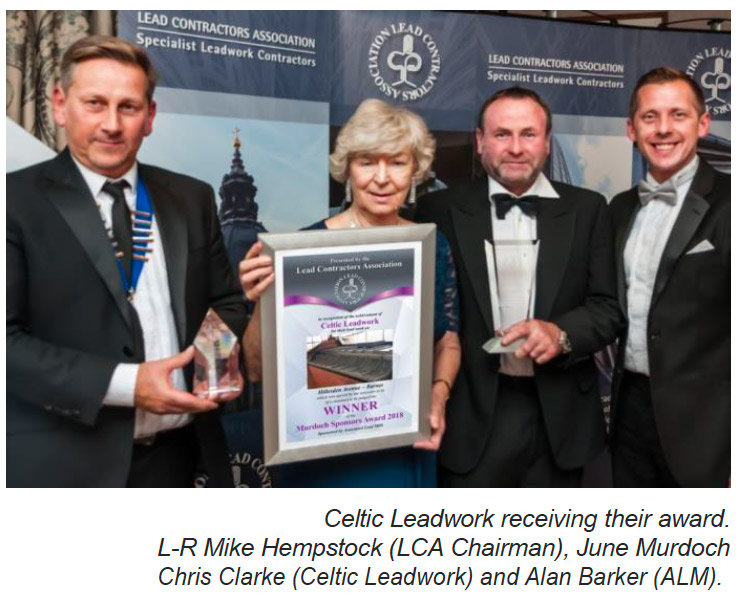 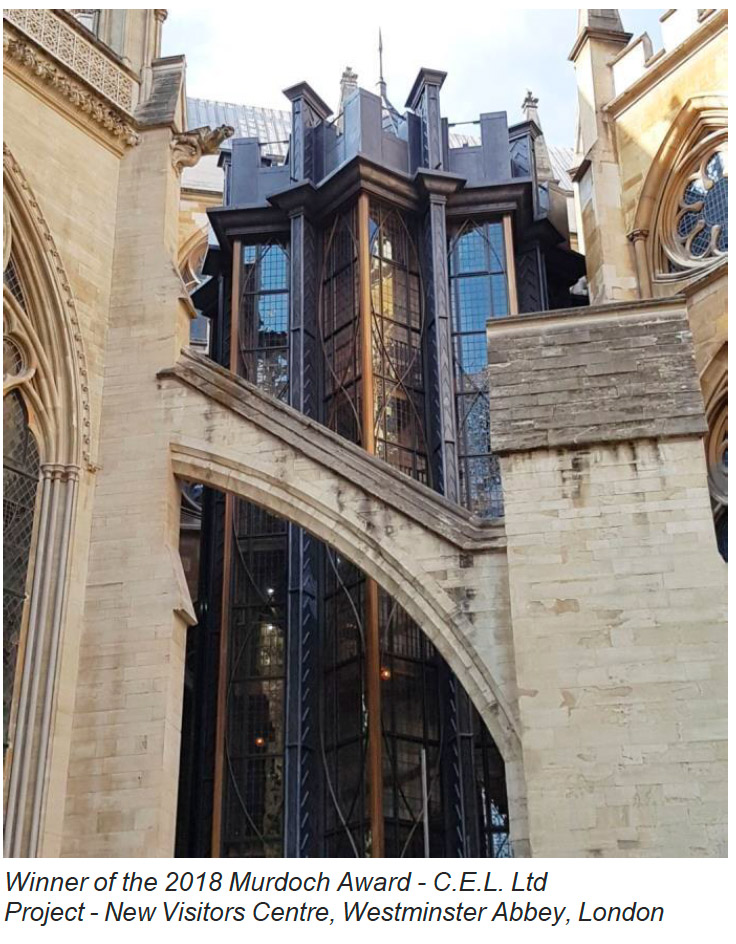 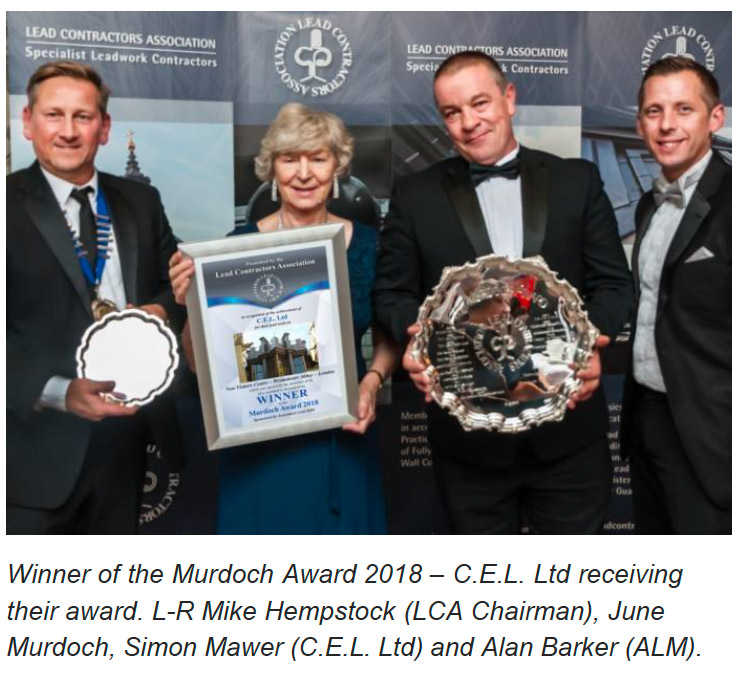 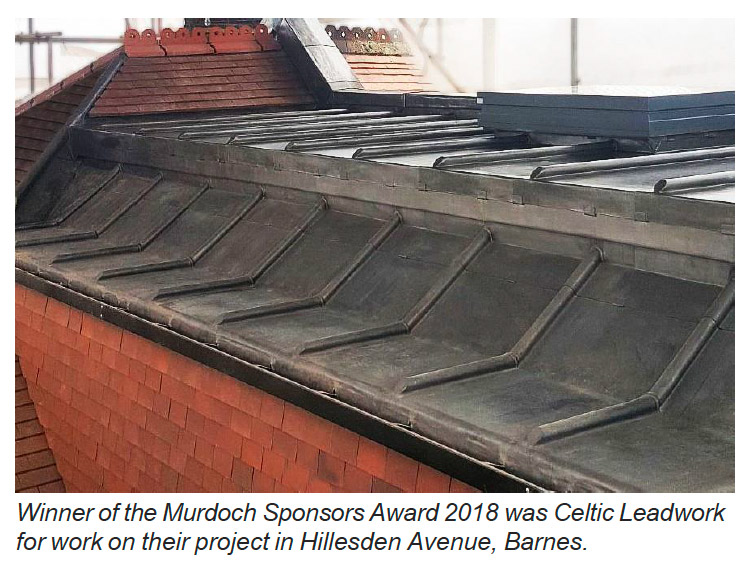 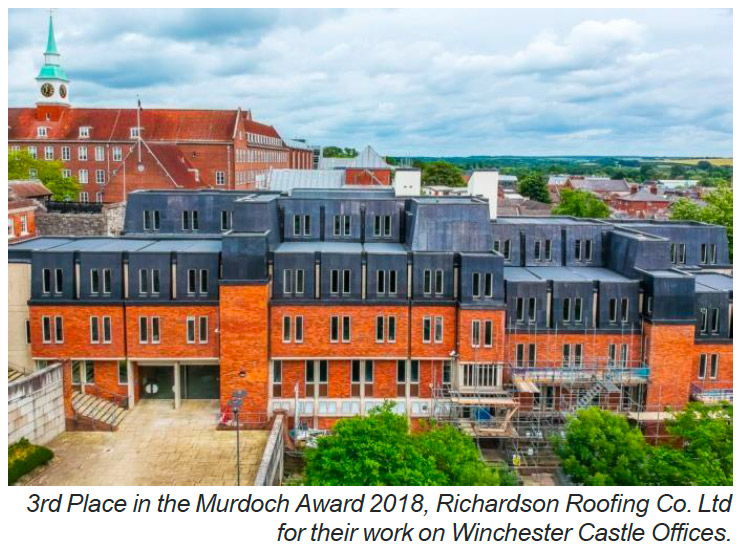